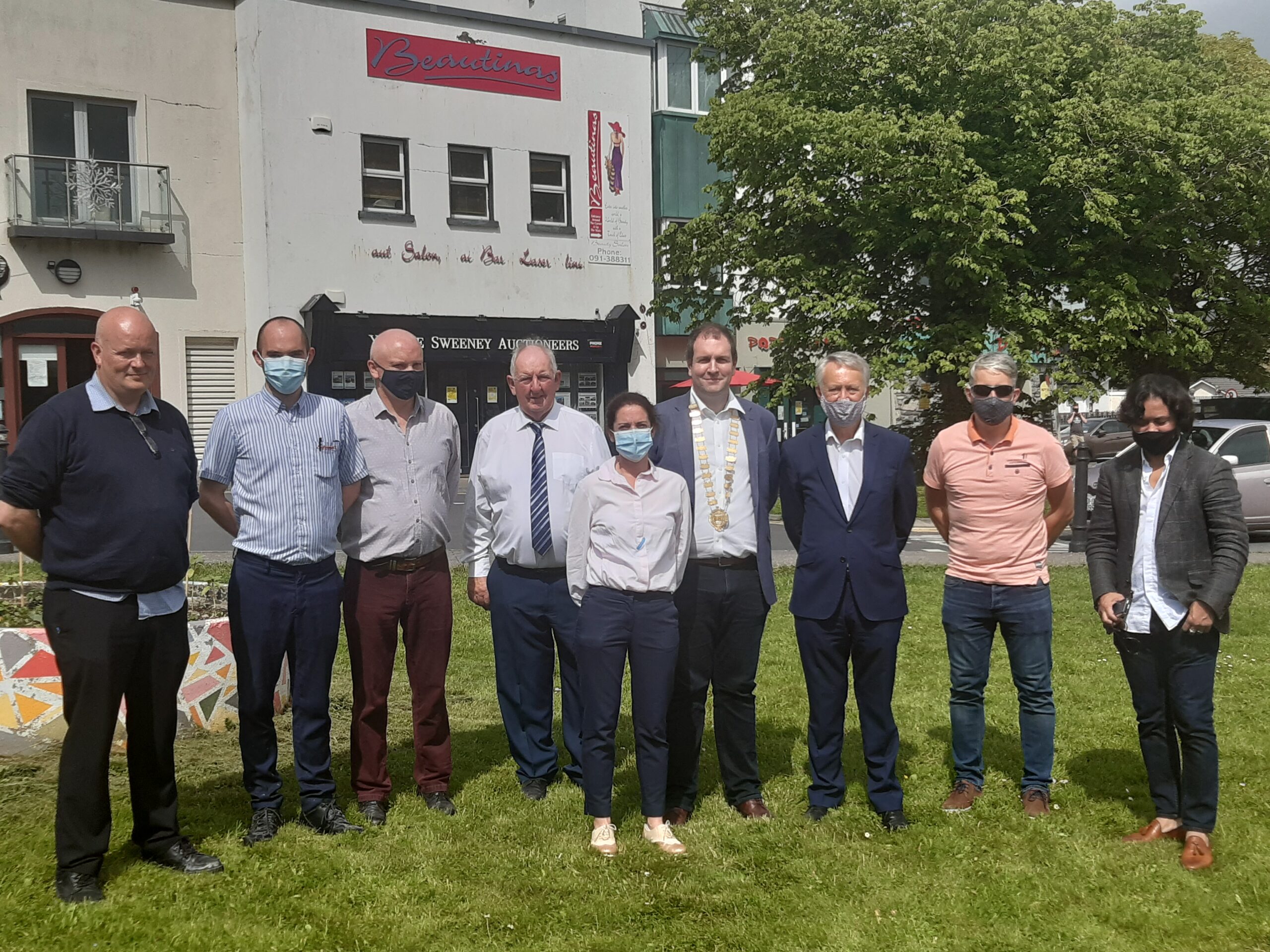 Since the announcement by Minister for Transport, Eamon Ryan on the 26th April last that €15m in funding was being allocated to an Additional Outdoor  Infrastructure  Scheme, the Oranmore Community Development Association (OCDA) and local councillor,Liam Carroll have been engaging with officials  from Galway County Council to secure portion  of this funding for our village. The OCDA has also had discussions with a broad range of business owners who provide valuable employment for many in our community.
Cllr Carroll and the Chairman of the OCDA, Tom Broderick were informed this week that Galway County Council  had secured just over €500,000 in funding  under the  Additional Outdoor Infrastructure  Scheme and  that €100,000 had been allocated to Oranmore for the the development of a Public Realm type facility in the centre of the village. This funding will be used to provide Outdoor Seating and Tables for  outdoor dining, Solar Lighting, Screens,Flower & Plant  Holders,Solar Compactor Litter Bins and Cycle Parking  Stations.
This Public Realm type facility which has been discussed at length by the members of the Oranmore Community Development Association will be located on the Castle Roadand will encompass the Green Area, Roadway and Bus Bay with an entry point to the green area behind the recently resurfaced 3G astro turf pitch. Business representatives from the Hospitality and Retail sectors in Oranmore Village were briefed on the funding announcement on Friday afternoon and indicated their unanimous support for the initiative in the presence of the Cathaoirleach of Galway County, Cllr James Charity, who praised the Development Association for their foresight and vision.
Speaking at the briefing Cllr Carroll and OCDA  Chairman Tom Broderick said that securing this funding for Oranmore was another major achievement for the Development Association which had come in the same week as the good news for Gaelscoil de hIde and Calasanctius College was announced.
Cllr Carroll said that the new facility would be a focal point in the centre of the village and he envisaged that local music groups such as Comhaltas Ceoltoiiri Eireann and groups such as the Contempo Quartet could put on outdoor performancesduring the Summer months.He also stated that the facility would be an ideal venue for outdoor Puppet Shows, Readathons,etc etc for the children in the community. He asked people to put on their thinking caps and come up with creative ideas.
Both Chairman Tom Broderick and Cllr Carroll paid a special tribute to Ms Paula Higgins, Senior Executive Engineer, Oranmore/Athenry MD, to Mr Damien Mitchell, SeniorEngineer, Operations and to the staff in the Community and Enterprise Section of Galway County Council who had worked diligently with such a short timeframe available to secure this significent funding.
The Oranmore Community Development Association would welcome ideas and suggestions from all sections of the community as to the type of events which could be put on once the facility is completed.Please contact Jonathan Kent at 091 790335  or email ocdamanager@gmail.com

Keep Well in Oranmore this Christmas!!!